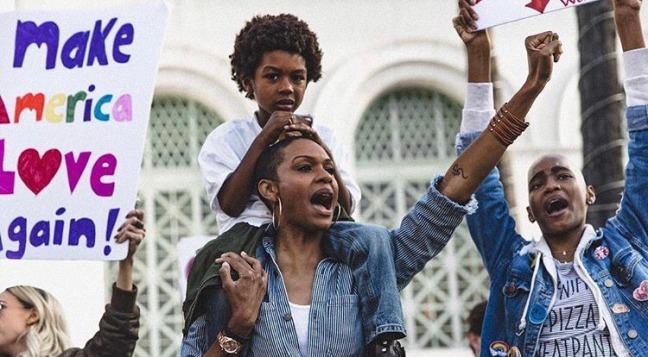 This weeks blog post is written by Stephanie Williams. Stephanie is one of the lead pastors of Mill City Church. Mill City is a community focused on loving Minneapolis in the name of Jesus. She is also a professor for ministry classes at Bethel University and Seminary in St. Paul.

She has experience coaching leaders and churches around the United States and Canada with 3DMovements, The Missional Network and as well as through her own consulting content. Steph is a gifted speaker in the areas of missional communities, leadership, young adult and emerging leaders, discipleship, identity, faith and workplace integration, emotional intelligence and life on mission. She runs a podcast with speaker Jo Saxton called Lead Stories.

Featured photo was take by McKenna Bryn. You can see more of her stunning photography at www.mckennabryn.com

Today women all over the world will march.

They march for many different reasons.

Some have entered into this season weary, angry, tired and worn out.

Still, others, like myself, am encouraged. Even though there has been many causes for discouragement.

Women are designed to bring people together, find unity in diversity, hold tension for the sake of others and be sure people aren’t left behind and left out.

So, then, as the title suggests, why do I coach and lead men?

Men, as well as women, have coached and led me. They have helped shape me into the leader I am today. Without the wisdom of men in my life, I would not be able to lead in my full capacity.

I believe that men need women to coach and lead them as well. I know that some disagree with me and that’s ok.

However, I have seen so much in my years of leadership and I have found this to be true:

The men who I respect the most for leading at their highest capacity have women as mentors, coaches and leaders.

We have never declared our podcast as designed only or especially for women, but most people assume that it is.

Why? Because two women lead it.

If two men led a podcast (like MOST podcasts) people would not assume it is for men only.

Jo and I love to equip and empower women.

However, I would suggest that PART of empowering women, is coaching and leading men so that they follow strong women and thus can empower strong women better than they could without that leadership.

One of the “Lead Stories Men” was sharing with me the other day that sometimes he hears us share on the podcast and SOME episodes he thinks “this sounds like it is directed to women only. Maybe this isn’t for me??”

I explained this to him: Perhaps we sometimes do direct our language towards women- partly because WE are women.

It then takes some work to contextualize the message to your leadership as a man.

However, as a female leader – welcome to my LIFE!

I am constantly having to translate what male leaders think is directed to all leaders that really are words better directed to men.

Often, I have letters sent to me calling me “brother” or asking me to come to the dinner for pastors and their wives.

Men – even the experience of needing to do the translation and contextualization work, is IMPORTANT!

I want to thank the men who have been strong, brave and courageous enough to step intentionally towards having female leaders in their lives.

My teaching, preaching, coaching and mentoring is offered to whoever God calls me to lead. I can only offer that because of those who have trusted God and led and continue to lead me.

Lead Stories Media is for whoever God calls us to empower.

If you know men who have said they are ready for female voices to speak into their lives, share Lead Stories with them.

Help with the assumption by saying, “Yes, two women are leading this media company, but don’t assume that means it is only for women.”

Women marching all over the world – I am with you. And I know MANY men who are with you as well!