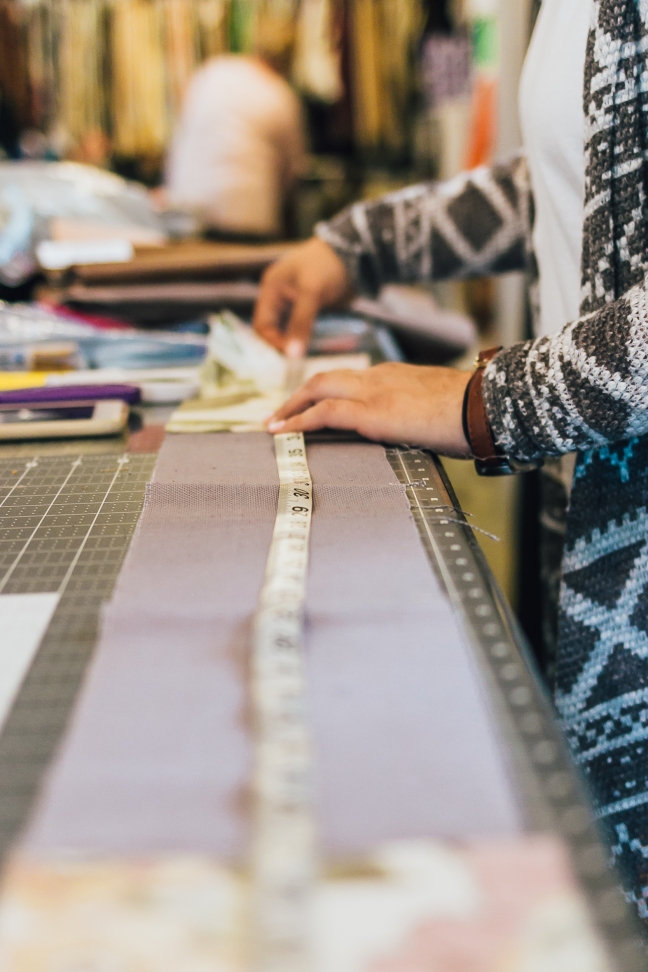 One of the core values of Peace of Thread is “we sew and mend, not only physically, but emotionally and spiritually as well.” Peace of Thread hires local refugee women, teaches them the skill of sowing, and offers them community and resources. We had the privilege of spending a day with Denise Smith, the founder of Peace of Thread, at their headquarters in Clarkston, GA.

We heard all the struggles and fears, hopes and dreams of a woman who has dedicated her life to empowering women. We are so pleased to bring you the first part of our series on Peace of Thread and we hope it will inspire you to love louder.

“You can do anything for two weeks,” Denise Smith said to us as we stood in a room charged with color. Rolls of textured fabric lined the walls. The long table we stood next to was accented with straps of leather, scissors, sewing machines, and half-finished purses. This is the headquarters of Peace of Thread, a non-profit organization located in Clarkston, Georgia.

Peace of Thread’s mission is to empower refugee women to make a new life for themselves and their families here in America. The main way they do this is through hand-made, high quality, one-of-a-kind bags and accessories.

Denise, the founder and CEO of Peace of Thread, lived and worked in the Middle East for almost seven years of her life. Her experience with refugees began in Lebanon, where she built relationships with Iraqis the war in 2004. Many of them had been escaping from violence, persecution, and even torture. She learned to speak in the Iraqi dialect of Arabic and gained a deeper understanding of what it means to be a refugee. She came back to the States in 2011, unsure of who she was and what she was supposed to be doing.

It was from that place that Peace of Thread began.

Denise created this organization almost by accident. It started when she first saw pictures of covered women on her home church’s website. They were bringing refugees to the church for a thanksgiving dinner.

“They were trying to find someone to help connect refugee families with host families,” Denise said. “So I did that for a while. But I just thought, this is not going to work. We are taking them out of their village and putting them in our village and telling them we have the right food, we have the right things.”

Denise knew that these refugees needed people to come to them and enter into their world. When she visited their apartment complexes, she found that the moms were standing around doing nothing. They didn’t trust each other, and they didn’t have relationships. They were forced into community with each other and forced to be friends when they became refugees.

“I decided I could take some cookies, tea, and a blanket and welcome them to our country, so the next day I did that. I sat down with them, and we had a great conversation in Arabic. They were all wallflowers and kind of afraid, and here comes this old blonde American women speaking in Arabic to them.”

After a few weeks of this, she thought of something that she had been doing all her life: sewing. 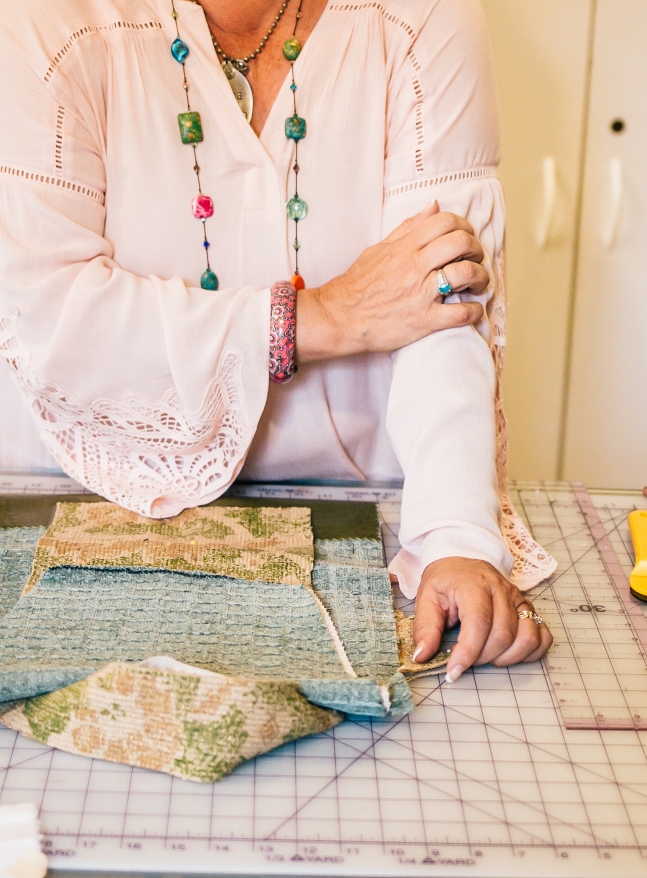 “I decided I could teach these women how to sew for 2 weeks. We made our first flyer in Arabic and sent it around to everyone…The only thing I had was my machine, my best friend (that’s what I call my seam ripper) and my scissors.”

They started out in the cockroach infested basement of an apartment building. During that summer, when there was record breaking temperatures of over 100 degrees, Denise taught the refugee women how to sew in a room with no air-conditioning, broken concrete, and one light bulb hanging from the ceiling to give light to their work.

“I tell everybody that I’ve ever discipled that you can do anything for two weeks. Anything for two hours. If you’re being tortured. If you’re hungry. If you’re in a bad spot. If you’re kidnapped. You can survive. We did a lot of really hard training before we went to the field. You have to be able to teach yourself how to get to a happy spot when you’re in an uncomfortable situation. You have to be able to push through. And if you can’t, you’re going to miss what God is doing.”

Every morning Denise loaded up her car with supplies, drove to Clarkston, unloaded it into the basement, and taught a handful of Iraqi refugee women how to design and sew; and every night she loaded everything back into her car and drove home. Not many people would do what she did, but not many people are like Denise. She fell in love with that community of women and two weeks turned into another two weeks and another and another. They relied on donations and prayer to keep them going, and as they kept showing up, so did the miracles. The biggest miracel was the provision of more fabric than they knew what to do with. 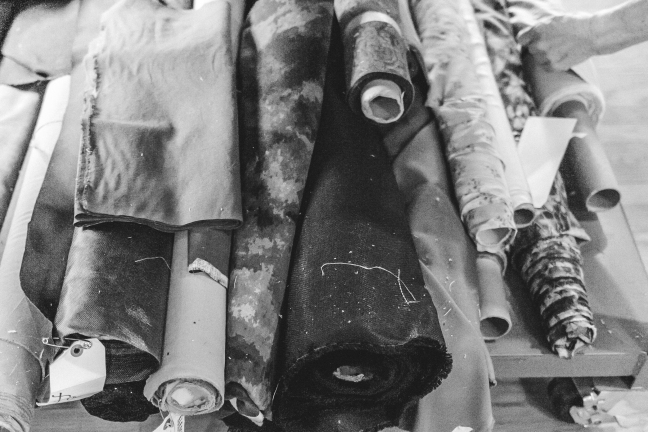 After speaking at a church Denise got connected to someone at the Atlanta Decorative Arts Center. It provides designer-made fabric from all over the world for the whole southern eight states. Things created out of these types of fabric sell for tens of thousands of dollars.

“We went and our jaws were on the ground. Afterwards they just started to call me. Whatever they didn’t sell and whatever they had left over, they gave us. We moved from the basement to a workout room that had two treadmills which became our ironing boards… We didn’t know what we were doing. We just knew that the women loved it. And when they loved it, we loved it. We thought ‘if it lasts for a couple months then it lasts for a couple months’. I didn’t have a business plan. I didn’t think ‘oh I’m going to start this business, and it’s going to be a non profit.’  Every two weeks we would say ‘Let’s go two weeks and see what happens’…and then we’d do it again another two weeks and another two weeks. We’d say to ourselves ‘Do we love it? Yes we love it’. It got me up in the morning.”

It lasted much longer than a couple of months. 6 years later Peace of Thread is still growing. Denise’s faithfulness and perseverance grew this organization from two weeks in a basement into a beautiful community. But Denise’s story is not one of arriving. As most stories go, it is an ongoing struggle of showing up and pressing on again and again and again. She had no plan. She just knew she wanted to love these women as best as she could.

Peace of thread had become more than just a sewing class, service, or volunteer work for her. The women had became her friends and her family.

In part two of this feature, we are going to hear more from Denise about her obstacles, as well as the struggle of living in both an underserved refugee community and rich, southern suburbia. Peace of Thread is growing and blessing the refugees of Clarkston at an incredible rate and we cannot wait to share it with you.

Until our next post, take some time to check out their incredible bags and shop online here: http://www.peaceofthread.com/shop/

3 thoughts on “Peace of Thread: Amplifying the Voices of Refugee Women of Clarkston. Pt. 1”