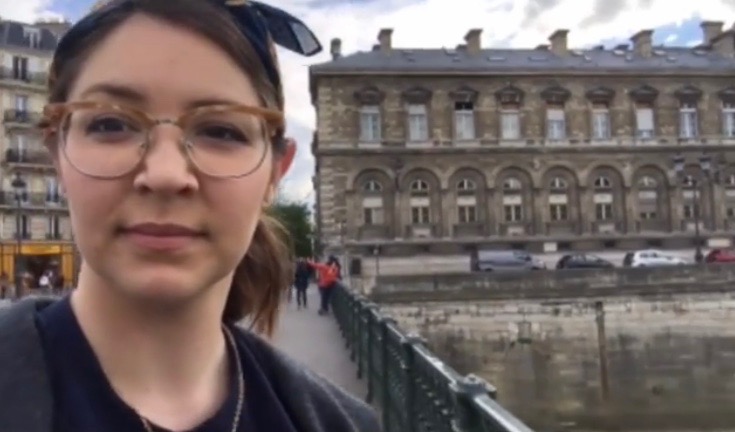 Paris is Always a Good Idea

Lydia Benitez, a close friend of Release the Women, took a solo trip to France a couple of months ago, thoroughly documenting on Instagram as she went. She was completely vulnerable from the start, sharing the real anxiety and loneliness that overwhelmed her first night. We were captivated by every extremely raw and genuine post as her journey grew from something so fearful to something so wonderful and romantic.

We asked Lydia to share with us her story of traveling to Paris alone.

For Christmas last year, my sister gave me a copy of “Are We There Yet.” Throughout the pages of her book, Mari Andrews writes about the international trips she takes alone, saying she treasures her alone time and actively does not allow other people to join. Inspired by this take-the-world-by-the-horns, independent woman attitude, I bought a flight to Paris.

I’ve travelled alone before. Everything is amplified. The beauty. The excitement. The anxiety. The loneliness. My first solo trip started on the mangroves of Puerto Rico. I was anxiously shuffling between books I didn’t like, texting pictures to my friends back home, and crying that I had no one to share the experience with. On my second attempt in Colorado, my car rental had an unexpected mile limitation which threw me into disarray. I began driving to a trail, but stopped at a random hotel and sunk into one of the deepest depressive episodes I have ever experienced.

“Paris will be different. I am different—healthier—emotionally stable.” This was the mantra I recited to myself for the two months leading up to Paris—all the while calling every friend I could think of and trying to convince them to go with me.

I knew I wanted this trip to be different; I knew I wanted to walk, sit and take in a new city, but I didn’t have a tangible vision of what that looked like. Slowly accepting that my boyfriend wouldn’t secretly buy a ticket as a birthday surprise,  I started looking for local tours that would allow me to interact with other humans while there. I came across something called “Write and Wonder in Paris.” A few days before I left for France, I was sent a copy of the Flow Magazine with a workbook add-on filled with writing prompts. Writing was going to be my means for experiencing and internalizing Parisian culture.

I landed in France just before midnight only to discover my Airbnb host had changed plans while I was in flight. It took a series of events that included closed train routes, five percent battery on my phone, and a 75 euro taxi ride to me bring me to the McDonalds where my key was left, five minutes before they closed. Finally I was in my flat, slightly relieved, ready to charge my phone, call home, and go to sleep. But when I searched for my outlet converter I realized that I had forgotten it. I felt immediately defeated.

I was in a new country, overwhelmed with unknowns, and completely separated from my usual comforts.

I eventually found a portable charger with a little power left in it. I used it to post a story on Instagram sharing my anxieties and asking for good vibes. As it turns out, others have had similar experiences upon arrival to Paris. I got so many responses from people sharing stories about their travels to France. They all took wrong trains, taxi rides to the opposite sides of the city, or lost their phones. After reading the replies, Facetiming with my dog, and listening to my boyfriend read a chapter of harry potter over the phone, I was able to brave the night and attempt sleep.

The next morning, I had just enough battery left to find a store that carried outlet converters.

With the wind back in my sales, I was finally able to start taking in the beauty of Paris. I meandered to a nearby brasserie to eat, sketch, and people watch while waiting for my tour to begin. The women next to me were out for a slow afternoon lunch. They conversed in French, smoked cigarettes and smiled at each other when the waiter asked if they wanted dessert. He came back with a sampler including three desserts and a coffee. In that moment I gleamed with excitement—I was finally doing the thing I had been dreaming of for the last four months!

Write and Wonder in Paris set the trajectory for the trip. It began in a hidden garden with a reading of “I Wandered Lonely As a Cloud” by William Wordsworth and ended at Musée de la Vie Romantique. The host was a native Parisian woman in her late twenties, named Sarah, who sometimes seemed to lose track of the physical world because she was so engaged with the people around her.

Sarah told us about the artist that gathered where we were, the galleries they would host, and the libraries and creative spaces they established. We sat in their garden as she gave us a series of writing prompts.

Sarah had lent me a book about writing in Paris and how to psychologically open your mind to the art of writing. From this book, I drafted an outline of what the following days would look like. She took me to a famous sunset spot and told me about other writing workshops she had been developing, work she’d been doing with the city counsel, and her struggle as she shifts away from a business career to a freelance/creative life.

I felt so invigorated by the history of artistry in Paris. You could see societies responses to so many different events and climates throughout history. From gardens built to give peace or show love, to motifs demonstrating an era of heart break and return to passionate love.

I chose getting lost in the streets of Paris as my new route “home”—stopping at every floral shop and noting the mannerisms of the people there. When it poured rain, I tucked away into a random restaurant and pointed to a lentil dish and wine glass. Sometimes I would play a game that entailed trying to make it through the whole meal without telling my server that I didn’t speak French. After blank stares and wrong orders, I always lost.

As I walked through Montmartre, back to my flat, I passed a restaurant with a giant, vine-covered windmill on the roof and a little girl throwing a tantrum while her parents begrudgingly and walked in front of her.

While sipping coffee in a garden, I heard a lady say “well let’s just get to know each other.” And when I looked over a few minutes later, she was sitting on his lap, kissing him passionately.

The rest of my days in France had a different outline but the same underlying principle. Whether it was (never) making it to a bike tour, a garden visit or a museum exhibit, every day looked a lot like: wake up late, walk, sit, eat, write, get nervous about something new, figure it out, walk, eat a Brie-smothered baguette in the bath, and knock out.

Paris was a time of affirmation that my life is on the path I want it to be. My twenties have been about learning how to heal myself. The first portion consisted of me crawling into a hole and crying. I was so angry at my community for not showing up for me in the ways I felt like I needed. I was demanding. I was crumbling. I was clingy. After a few years of feeling broken, I realized that I didn’t have to play victim to life. I realized that I was in control of my own reactions, and that I could steer the direction of my own journey. Slowly but surely, I started to change my narrative from one that embraces sadness to one that embraces wholeness. A narrative where I take ownership of my own feelings and find ways to navigate through them on my own.

Paris was a way that I showed up for myself. By making one of my dreams come true. By proving to myself that I had healed enough emotionally to not spend another trip sinking into loneliness and depression. The most magical part about Paris wasn’t that I was traveling or in a new city—it was that I was happy, and there was no one there to make me happy. It was me, separated by a barrier of language, indulging in the pieces of the word that make my heart sing.

My dream used to be to find friends or a lover who would finally show up for me and saturate my heart with all the love it needed. These days I’ve realize that it doesn’t matter how many people show up for me in every perfect way, I am the only one that can do the work to heal. I have to read the books, go to therapy and experiment to find what works for me. No other human can do the work for me. It is such a beautiful thing to learn you are not helpless, but that you have everything you need to succeed.

Lydia Benitez is a biology teacher, writer, and adventurer. She loves reading good books, writing poetry, and going on walks her adorable dog Oliver. Follow along with her adventures on Instagram @thelydiacatalog.

One thought on “Paris is Always a Good Idea”